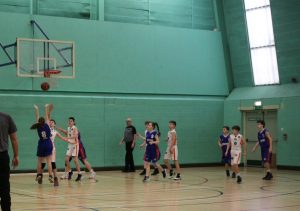 To say that XO‘s Arden Griffins u13 team completed a season of which the likes has never been seen before would not technically be correct – the season wasn’t actually completed due to the unprecedented directives triggered by the Coronavirus pandemic.

Barring that though, there can be little argument that this team, based at St Peters School in Solihull, was the most inclusive that any onlookers will ever have seen.  The WM YBL division, in theory, was a mixed one; the reality is that not a single eligible female player was seen in any of the squads that the Griffins team faced.

This was while, in 101 Griffins selections over the ten league matches that were played (by XO players ranging from Year 6 to Year 9), 61 were shared between 14 female players, the remaining 40 selections between 7 males.  Furthermore, after Christmas, minutes played were strictly equally shared amongst players.

The season started with early away defeats, as one would expect when only 1 of the 21 players in the squad had any competitive league experience – and that at half court u11’s.

The season highlight was a thrilling win at home to Nuneaton in the last match before Christmas.  The Equal Minutes, Equal Games policy thereafter meant that the team were effectively playing a different ball game, and whilst improving, the opposition appeared to be improving quicker.  This did result in some humbling defeats.

Strong in defeat, the players can each look back on a unique experience for Solihull basketball.  This should hold them in good stead as XO branches out and is able to offer more targeted opportunities.  Reinforced by those who joined later in the season, the squads will be looking to push on after any training that might be squeezed into whatever short pre-season may be available, after lockdown.

u13 YBL: February round up

You may have missed

Communities come together to support under 11s trying out basketball